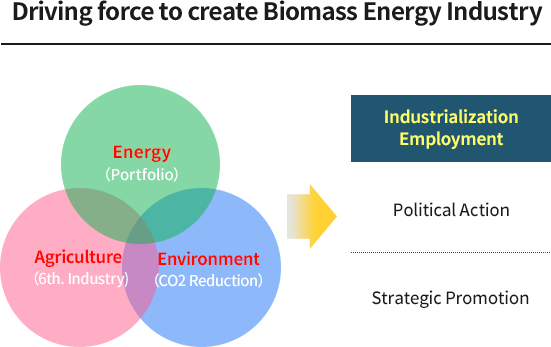 1. Biomass Power Generation (B.P.G.) has already formed a global market with a scale of \10 trillion. Although it is a major presence in Renewable Energy Power Generation (R.E.P.G.), the market of B.P.G. in Japan is still small scale. The background of introduction of B.P.G. is mainly based upon three driving force; “Energy Policy (Portfolio)”, “Environmental Policy (CO2 Reduction)”, “Agricultural Policy (6th. Industrialization)” and also from the view point of industry promotion and employment creation policy. Since the availability of domestic biomass resources is limited, it has structural problems in fuel procurement in Japan. 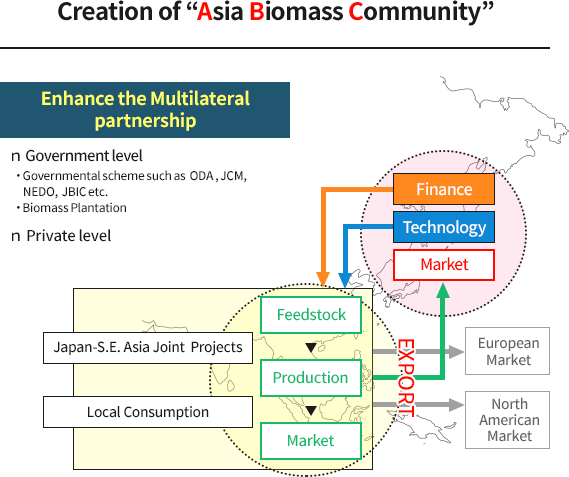 3. In the “Forest and Forestry Basic Plan in 2016”, the target of timber supply in 2025 is 40 mill. m3, and among them, the target for fuel usage is set as 8 mill. m 3 (The target for 2030 is unpublished), which indicates the above ① allocatable amount of Unused Timber, so there is a possibility that 240 thous. kW can be increased to 360 thous. kW in 2025. But unfortunately, it is a fact that over 70% of the total W.B.P.G. can not help but be covered by imported materials. Therefore, in order to achieve the FIT introduction goal in 2030, it is necessary to establish long-term stable fuel procurement schemes by effectively introducing imported fuels in addition to making maximum use of domestic fuel.

4. Three types of imported materials are mainly ①Chips, ②Pellets, ③PKS. But for fuel usage, ①Chips are generally imported in the form of ②Pellets, in order to save transportation cost. In 2015, an international trading volume of Pellets has reached to 30 mill. ton /year (20 mill. ton in EU, 2 mill. ton in Asia, 0.23 mill. ton in Japan)and the global market is established as an international trading commodities. The supply source to Japan has mainly been Canada, but from the situation that Japanese demand shall be rapidly increased in near future, diversification of supply sources is expected for Vietnam, Thailand etc. in Asia, USA, Russia and others. Meanwhile PKS was imported to Japan about 460,000 tons in 2015. But since it is a residue-based fuel from Palm plantation and supply sources are limited to Malaysia and Indonesia, it is difficult to establish a long-term stable procurement system. 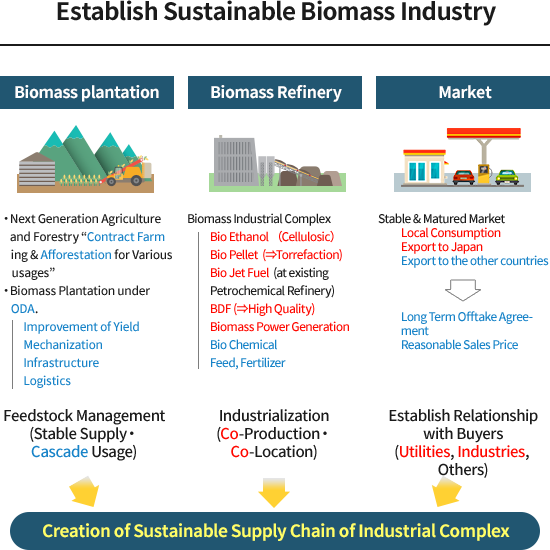 5. Since it is predicted that the demand of Pelletes and PKS in Japan will exceed the supply in the future, it is necessary to establish a long-term stable supply system. From this background, I propose that the company who proceeds FIT B.P.G. project in Japan will also promote manufacturing project of wood pellets (as J.V. with local partner) in Asia. Then as a next step, the Japanese company will proceed B.P.G project in that country as well by utilizing the wood pellets in the future, in order to establish a long-term stable supply chain system in Asia. I believe that these projects should be positively promoted by applying JCM scheme, JICA ODA, and JBIC finance scheme.